New neurons in the adult brain 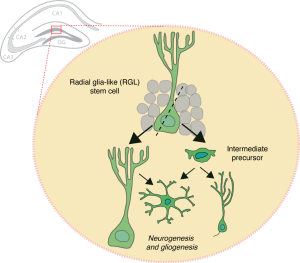 The dentate gyrus (DG) is one of the few regions of the mammalian brain that keeps adding new neurons through adulthood in what probably constitutes the most robust form of neuronal plasticity in the adult brain. Adult-born neurons contribute to memory formation and defects in neurogenesis have been associated with several human neurological and psychiatric diseases such as epilepsy, Alzheimer’s and schizophrenia. In addition adult-born neurons have also been used to study neuronal development.

We aim to understand how experience and neuronal activity contribute to the differentiation of adult neural stem cells and the integration of adult-born neurons into functional circuits in the dentate gyrus. We also study how this neuronal maturation process is altered in disease.

Imaging new neurons as they grow

The ability to track individual cells over their maturation period is crucial for our experiments. We use in-vivo 2-photon imaging as a powerful tool to study neuronal development since it allows for the recurrent probing of individual cells and circuits while keeping sensory input, neuronal activity patterns, and the physiological environment intact.

In vivo 2-photon images of GFP labeled cells in the DG imaged 60 days post-infection (dpi). Scale bar = 100 µm.Representative reconstructions of the dendrites of a newborn DGC, branches added and retracted between imaging time points are highlighted.

Experience and the activity it elicits are powerful modulators of neuronal development. As neurons mature they undergo several critical periods where specific behavioral experiences (for example environmental enrichment and exercise) influence circuit formation. This response to environmental cues is mediated through complex molecular regulatory networks. New neurons are therefore shaped by the environment they mature in.

Recent research has shown that experience during the early maturation period changes the timing of the integration of neurons into hippocampal networks and shapes their connectivity suggesting that adult-born neurons perform distinct functions in the DG, depending on the environmental inputs and cognitive demands present during maturation.

From new neurons to functional networks

Ultimately the maturation period of newborn neurons shapes not only their morphology, but also their responses to stimuli and their function in the brain. We use in vivo calcium imaging imaging tools and behavioral testing to probe the activity patterns and functional properties of adult-born neurons and the circuits they integrate.

In-vivo calcium imaging in the DG. 2-photon images and Ca2+ traces of neurons expressing a genetically encoded calcium sensor. Note sparse activity pattern, a defining characteristic of this area of the brain.